Unsettled: A Reckoning on the Great Plains (Paperback) 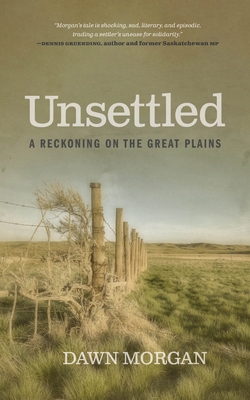 Unsettled: A Reckoning on the Great Plains (Paperback)

A probing memoir examining family tragedy on the Great Plains
A surprise rodeo leaves a buffalo bull dead and a cowboy gored to death. Seeing the death of the one man who was kind to him, and knowing it was his fault, Dawn Morgan's father goes on a bender and ends up dead. His sudden death and the mystery around it, combined with the blundering way Morgan learns of it, forces her to reflect not only on the events of the bloodied corral, but also the buffalo herds decimated and Indigenous Peoples displaced to make way for settlement in what was becoming ranching country in the prairies.

Unsettled is a deeply moving work of literary non-fiction, a probing memoir examining family tragedy in relation to stories--both fact and fiction--of settlers and Indigenous Peoples on the Great Plains. Morgan shares the internal struggle between resistance and allegiance to the settler-descendent stories she grew up with while paying respects to her father and documents the censorship she faces from her mother, loyal still to the pioneer myth of the early twentieth century. It is only when both parents are gone that Morgan is liberated to write a story of reckoning on the northern Great Plains.
Born and raised in Assiniboia, Saskatchewan, Dawn Morgan is currently Associate Professor of English at St. Thomas University in Fredericton, New Brunswick.