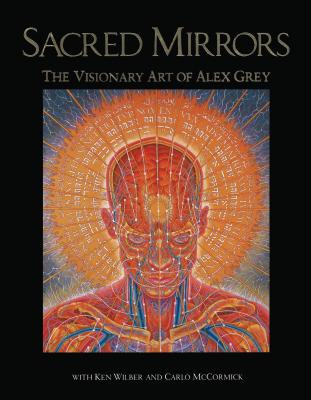 By Alex Grey, Ken Wilber (With), Carlo McCormick (With)


Special Order—Subject to Availability
This unique series of paintings takes the viewer on a graphic, visionary journey through the physical, metaphysical, and spiritual anatomy of the self. From anatomically correct rendering of the body systems, Grey moves to the spiritual/energetic systems with such images as "Universal Mind Lattice," envisioning the sacred and esoteric symbolism of the body and the forces that define its living field of energy.

Includes essays on the significance of Grey's work by Ken Wilber, the eminent transpersonal psychologist, and by the noted New York art critic, Carlo McCormick.
Alex Grey is the author of Sacred Mirrors and The Mission of Art. His work has graced the album covers of Nirvana and the Beastie Boys, has appeared in Newsweek, and has been exhibited around the world, including the New Museum and Stux Gallery in New York City, the Grand Palais in Paris, and the ARK exhibition space in Tokyo. In 1999 the Museum of Contemporary Art in San Diego honored Grey with a mid-career retrospective. He lives in New York with his wife, artist Allyson Grey, and their daughter, actress Zena Grey. In 2019, Alex Grey was cited as one of the "100 Most Spiritually Influential Living People in the World" according to Watkins Mind Body Spirit magazine.

Wilbur is one of the most widely read and influential American philosophers of our time. His writings have been translated into over twenty foreign languages.

McCormick is a writer and critic.
"Mr. Grey's paintings, as detailed and anatomically accurate as medical illustrations, present man as an archetypal being struggling toward cosmic unity--Grey's vision of a flawed but perfectible mankind stands as an antidote to the cynicism and spiritual malaise prevalent in much contemporary art."
— New York Times

"These are extraordinary works, exquisitely reproduced. Some people will be illuminated and transformed in the process of viewing. I found them compelling."
— Judi Koteen, Napra Trade Journal, Fall 1990

"The majority of Grey's recent work depict spiritual/energetic systems--the sacred and esoteric symbolism of the body and the forces that define its living field of energy."
— Magical Blend, January 1992

"The color plates are of exceptional quality depicting both human and spiritual forms in a variety of intriguing and thought-provoking ways."
— The Midwest Book Review