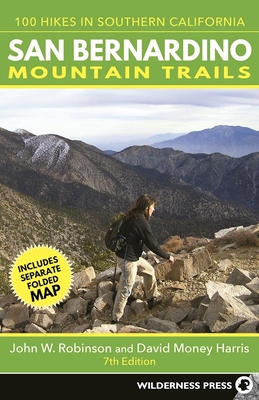 Discover the best of San Bernardino National Forest with this authoritative guide to 100 unforgettable hikes.

Southern California's highest and most rugged mountains are in the San Bernardino and San Jacinto ranges, in a unique region where wildly varied naturescapes--desert cactus and pine trees, snowcapped peaks and palm oases--are found in close proximity. With the Pacific Crest Trail weaving its way through the mountains and desert, there are endless opportunities to explore Southern California trails.

After more than 50 years in print, San Bernardino Mountain Trails remains the bible for Southern California hikers. This updated guide by veteran hiker and author David Money Harris contains new trips, as well as old favorites. This edition brings John Robinson's classic guide up to date with the latest trail conditions. Eight old trails, especially in areas that have become overgrown after fire damage, have been replaced with recently built or more heavily used trails.

San Bernardino Mountain Trails is noted for its comprehensive coverage of the San Bernardino, San Jacinto, and Santa Rosa mountains and its meticulously researched history of the ranges. Get to know the area before you explore it, and find the best trips for your skill level and interests.

JOHN W. ROBINSON has been exploring, backpacking, and climbing throughout the Mountain West, from Alaska and Canada to Mexico, for more than 50 years. His first guide, Camping and Climbing in Baja (now out of print), set the standard for guides to the Baja California mountains. His Trails of the Angeles, now in its eighth edition, remains the definitive hiking guide to Southern California's San Gabriel Mountains. He has authored or coauthored a number of the original Wilderness Press quadrangle guides, covering California's three major southern ranges: the San Gabriels, the San Bernardinos, and the San Jacintos. In addition, he has published numerous articles in Westways, Desert Magazine, Southern California Quarterly, Overland Journal, and Summit. If the mines of Southern California's mountains revealed gold and other precious minerals, they cannot compare to the treasure trove of information contained in this one man. His love for these forests, peaks, and wilderness areas is apparent on every page of his many works. DAVID MONEY HARRIS is a professor of engineering at Harvey Mudd College. He is the author or coauthor of six hiking guidebooks and five engineering textbooks. David grew up rambling around the Desolation Wilderness as a toddler in his father's pack and later roamed the High Sierra as a Boy Scout. As a Sierra Club trip leader, he organized mountaineering trips throughout the Sierra Nevada. Since 1999, he has been exploring the mountains and deserts of Southern California. He lives with his wife and three sons in Upland, California, and delights in sharing his love of the outdoors with their boys.