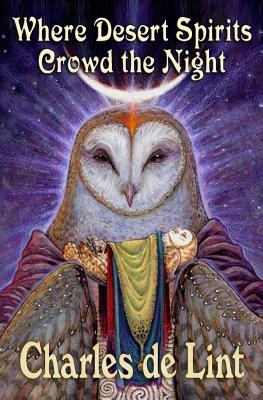 
Not On Our Shelves—Ships in 1-5 Days
(This book cannot be returned.)
A charming novella about one of Newford's best-loved characters: artist and dreamer Sophie Etoile. Lured by mystical Native American flute-player Kokopelli, Sophie opens a door in her dreams only to find herself in the wild Sonoran desert, her way back vanished. In her quest to return she gets sidetracked by Coyote, up to his usual mischief. A poignant tale touching on loss, hope and community. First published in Worlds of Fantasy and Horror #2, Fall, 1994. Cover art by Stephanie Lostimolo (http: //www.nethersphere.com/art.html). Charles de Lint is the modern master of urban fantasy. Folktale, myth, fairy tale, dreams, urban legend-all of it adds up to pure magic in de Lint's vivid, original world. No one does it better. - Alice Hoffman Charles de Lint writes like a magician. He draws out the strange inside our own world, weaving stories that feel more real than we are when we read them. He is, simply put, the best. - Holly Black De Lint is probably the finest contemporary author of fantasy - Booklist, American Library Association Unlike most fantasy writers who deal with battles between ultimate good and evil, de Lint concentrates on smaller, very personal conflicts. Perhaps this is what makes him accessible to the non-fantasy audience as well as the hard-core fans. Perhaps it's just damned fine writing. - Quill & Quire De Lint's evocative images, both ordinary and fantastic, jolt the imagination. - Publishers Weekly It is hard to imagine urban fantasy done with greater skill - Booklist, American Library Association.
Charles de Lint is a full-time writer and musician who makes his home in Ottawa, Canada. This renowned author of more than seventy adult, young adult, and children's books, has won the World Fantasy, Aurora, Sunburst, and White Pine awards, among others. Modern Library's Top 100 Books of the 20th Century poll, voted on by readers, put eight of de Lint's books among the top 100. De Lint is also a poet, artist, songwriter, performer and folklorist, and he writes a monthly book-review column for The Magazine of Fantasy & Science Fiction. For more information, visit his web site at www.charlesdelint.com You can also connect with him at: Facebook: http: //www.facebook.com/pages/Charles-de-Lint/218001537221 Twitter: https: //twitter.com/#!/cdelint Tumblr: http: //cdelint.tumblr.com/