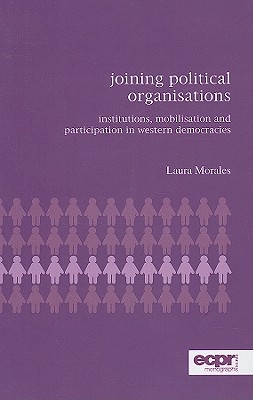 
Not On Our Shelves—Ships in 1-5 Days
From political parties to environmental organisations, citizens join a host of associations in order to influence policymaking and political agendas. Yet why in some western democracies do citizens join political organisations much more than in others? Drawing on a large number of cross-national surveys and data sets, Morales shows that huge cross-national variations in political membership are not so much related to social or attitudinal differences between these countries' citizens, but are explained to a great extent by the structure of the political system of each nation.
Laura Morales is a research fellow at the Institute for Social Change of the University of Manchester. She has previously taught political science and research methods at Universidad Aut?noma de Madrid (2001-2003), Universidad Complutense de Madrid (2003), and the Universidad de Murcia (2003-2007). ECPR and the Spanish Political Science Association awarded her with prizes for the best Ph.D. thesis in 2004. Her interests lie especially in the areas of electoral behaviour, political participation, and comparative politics. She has published extensively on associational involvement, political participation, and political parties.