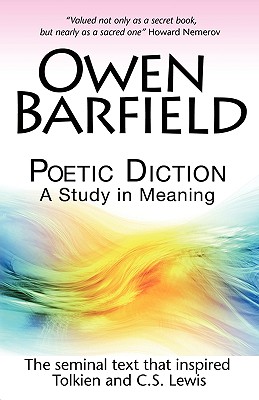 
Not On Our Shelves—Ships in 1-5 Days
(This book cannot be returned.)
First published in 1928, 'Poetic Diction: A study in Meaning' presents not merely a theory of poetic diction but also a theory of poetry and a theory of knowledge. "Language has preserved for us the inner, living history of man's soul. It reveals the evolution of consciousness." Owen Barfield Owen Barfield is one of the twentieth century's most significant writers and philosophers. A member of the Inklings, Barfield's ideas and literary artistry influenced fellow-Inklings C.S. Lewis and J.R.R. Tolkien, and won praise from many of the foremost literary figures of the century. Praise for Owen Barfield: "A prolific and interesting thinker" - Times Literary Supplement "The wisest and best of my unofficial teachers."- C.S.Lewis "A masterpiece ... of prophetic value" - T.S.Eliot "possibly the clearest and most searching thinker of the present time" - Howard Nemerov.