I Lost My Job and I Liked It: 30-Day Law-Of-Attraction Diary of a Dream Job Seeker (Juicy Living) (Paperback) 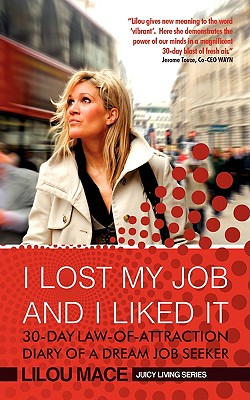 I Lost My Job and I Liked It: 30-Day Law-Of-Attraction Diary of a Dream Job Seeker (Juicy Living) (Paperback)


Not On Our Shelves—Ships in 1-5 Days
International Internet guru Lilou, a.k.a. 'Big L', believes that we can create anything we want using the power of our thoughts (as revealed in The Secret). Drawn to the USA from France, she used this law, called the Law of Attraction, to co-found the '100-Day Reality Challenge' community, build a following of thousands of YouTubers, and meet Oprah Winfrey, someone she greatly admires. Now she's in London and she's lost her job. The time has come to test her beliefs to the limit: at a time of global crisis can she use the Law of Attraction to nd her dream job, and thereby 'empower millions' to do likewise? This is her 30-day stream-of-consciousness diary, from the moment she was sacked. Travel with her as she grapples with doubt, relishes avocados and nds something to be grateful for in each and every step of her journey. Deploying a battery of mood-shifting, life-enhancing, and possibly reality-changing techniques, she attempts to prove to herself - and to you - that a juicier way of living is possible. While 30-something Lilou would probably get on with the fictional Bridget Jones, her real-life diary is a very different thing. Humble, moving, funny and perceptive, it demonstrates the style of leadership she believes the world desperately needs. If Lilou's approach works, this book might just be The Survival Guide for Our Times, and she the spokesperson of a revolution. Read it, and, most importantly, try it out.