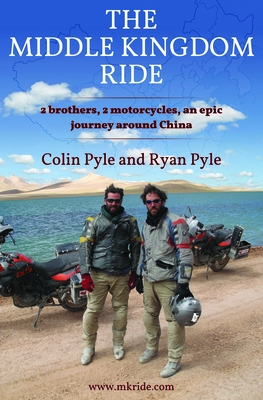 
Special Order—Subject to Availability
When Canadian brothers Colin Pyle and Ryan Pyle set out from Shanghai on a motorcycle journey that had never previously been attempted, they thought they had some idea of what lay ahead of them. It was a misconception that became evident by the end of Day 1. But, despite the many challenges they faced, 65 days and 18,000 km later they'd succeeded in circumnavigating China. In an expedition of extremes, Colin and Ryan visited the third lowest point on Earth and slept at Everest Base Camp beside its highest mountain. In their book, The Middle Kingdom Ride, Colin and Ryan take us with them as they travel through the diverse and extraordinary landscapes of China, from its border with North Korea, to the ancient Muslim city of Kashgar, across the vast empty spaces of the Mongolian grasslands, over the mountains and into the monasteries of Tibet.
Born in Toronto, Canada, Ryan Pyle obtained a degree in international politics from the University of Toronto in 2001, then realized a lifelong dream and traveled to China on an exploratory mission. In 2002, Ryan moved to China permanently, and in 2003, began taking freelance newspaper and magazine assignments. In 2010 he began working full time on television and documentary film production and has produced and presented several large multi-episode television series for major broadcasters in the United States, Canada, the United Kingdom, and continental Europe. Colin Pyle graduated from Ryerson University in Toronto with a degree in finance, was part of a very successful currency brokerage start-up in Toronto, and stepped down as president of Equity Foreign Exchange Services to hit the road and live life. Colin completed an MBA from Hult International Business School, and is an active entrepreneur in London, England, where his main focus is growing Mandarin House to be the first global Mandarin language and cultural school.