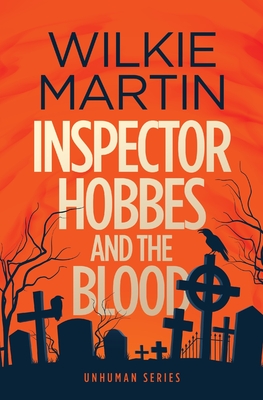 This is book number 1 in the Unhuman series.

As a crime wave breaks in the quiet Cotswold streets, Andy Caplet, a failed reporter, is reluctantly immersed in Inspector Hobbes's investigation. Allergic to danger and exercise, Andy is thrown into grave confusion as he discovers not everyone is human. Not only must he come to terms with Hobbes's extreme oddness, and the tooth-collection of Hobbes's housekeeper, the indomitable Mrs Goodfellow, but he must work out if a suicide, a murder, and several robberies are connected? And what is the connection?

Hobbes goes missing. The cops decide he's big and bad enough to look after himself, but Andy, striving against deep-rooted incompetence and clumsiness, sets out to find him. With a big bad dog to assist, armed only with a leg of lamb, and despite losing his trousers, he discovers the key to the mystery is in the blood. But whose blood? Where is Hobbes? And can he catch vampirism off false teeth? This is the first in Wilkie Martin's unhuman series of fast-paced, comic fantasy crime adventures, with lashings of great food.

'I ought to tell you, dear, he can get rather wild when he's hungry' 'Odd, inventive, and genuinely very funny indeed.' Katie Jarvis, Cotswold Life