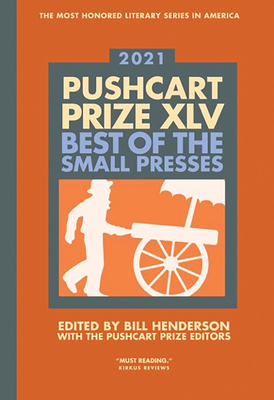 This is book number 45 in the The Pushcart Prize Anthologies series.

The 45th edition of the most celebrated literary series in America.

Pushcart Prize XLV is continuing evidence that much of today’s vibrant writing appears only in small journals and book presses.The series has been selected for Publishers Weekly Carey Thomas Award, the National Book Critics Circle Ivan Sandrof citation, and the Poets and Writers/Barnes and Noble “Writers For Writers” award among others.Here are 70 authors from more than 50 presses as selected from the nominations of 220 distinguished Contributing Editors and 800 participating presses.Recent reviews include: “Essential.” Library Journal“Must reading” Kirkus Reviews“Distinguished.” New York Times Book Review

Bill Henderson is the founder and editor of the Pushcart Prize. He received the 2006 National Book Critic Circle’s Lifetime Achievement Award and the Poets & Writers / Barnes & Noble Writers for Writers Award. He is also the author of several memoirs, including All My Dogs: A Life. The founder of the Lead Pencil Club, Henderson lives on Long Island and In Maine where he runs the Pushcart bookstore – “the world’s smallest bookstore.”
“Sprawling, trenchant … established and emerging authors working at the top of their game.”
— Publishers Weekly on Edition 44