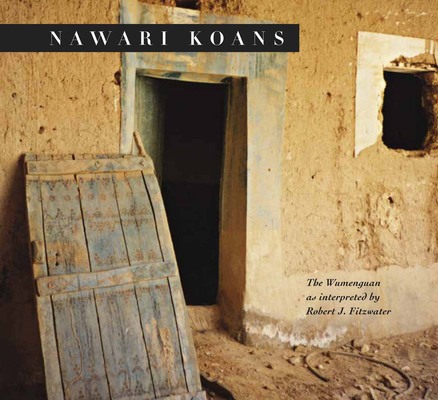 Nawari Koans is an interpretation on the Wumenguan, which is a translation of a Chinese Zen classic called the "Wumenguan'' from about A.D. 1200, this book will be popular with anyone seriously interested in Buddhism or Zen meditation. Authored by the late archaeologist and anthropologist Robert Fitzwater, who interpreted the Zen Koan through his own American life.

American artist James Stanford’s diverse practice includes photography, digital illustration, painting, and drawing. Stanford studied painting at the University of Washington (UW) (MFA) and the University of Nevada Las Vegas (UNLV) (BFA). Dedicated to creativity and the fine arts, he has taught at UNLV and UW, established the Smallworks Gallery, and curated exhibitions at various venues, including the Las Vegas Contemporary Arts Center. Today, Stanford is well known for his edition series Indra’s Jewels, a group of digitally reinvented mosaics of patterns that are at once decorative and contemplative. The vibrant images are reminiscent of physics-like models of space, but also have an immaterial, spiritual quality, evoking the artist’s strong connection to Zen Buddhism.

Milo Duffin has been an award-winning Designer & Art Director for over 44 years. He's worked for numerous national and international clients, creating everything from billboards to buttons. He's been collaborating with James Stanford for over 35 years on various projects. In 1985, James and Milo formed Stanford & Associates, the first Macintosh-based design studio in Las Vegas.

Robert J. Fitzwater attended Long Beach State to study anthropology. He later transferred to UCLA where he received his undergraduate degree and masters degree. Fitzwater, later taught at Idaho State University and UNLV. Along the way Fitzwater worked at NASA during the Mercury, Gemini and Apollo Missions.

Claude Whitmyer was born in 1947 and spent the first two dozen years of his life growing up in Las Vegas. He attended graduate school at the University of Washington in Seattle and moved to San Francisco in 1973. His first book, "Running a One-Person Business," (with Salli Rasberry) was a Book of the Month Club choice in 1990. He also edited and contributed to two anthologies, "Mindfulness and Meaningful Work: Explorations in Right Livelihood" and "In the Company of Others: Making Community in the Modern World" (with Gail Terry Grimes). He is known for his unique, values-based approach to coaching which includes "Good Work Guidance" for those seeking meaningful work and "Good Business Advice" for entrepreneurs seeking to do what they love and still pay the bills. Between 1998 and 2008 he and his wife Gail Terry Grimes developed over 100 hours of instruction and wrote half a dozen books about meeting and learning on the Internet. They are bicoastal with homes in Northern California and Southern Maine.