Autonauts of the Cosmoroute: A Timeless Voyage from Paris to Marseilles (Paperback) 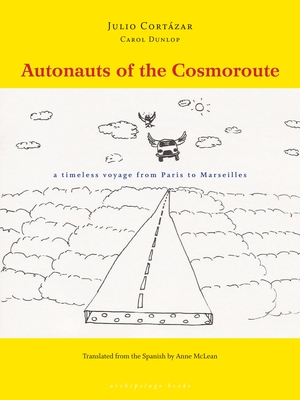 Autonauts of the Cosmoroute: A Timeless Voyage from Paris to Marseilles (Paperback)


Not On Our Shelves—Ships in 1-5 Days
Autonauts of the Cosmoroute is a travelogue, a love story, an irreverent collection of visual and verbal snapshots. In May 1982, Julio Cortázar and Carol Dunlop climbed aboard Fafner, their VW camper van, and embarked on an exploration of the uncharted territory of the Paris-Marseilles freeway. It was a route they¢d covered before, usually in about ten hours, but his time they loaded up with supplies and prepared for an ardous voyage of thirty-three days without leaving the autoroute. Along the way they would uncover the hidden side of the freeway and record The trip’s vital minutiae with light-hearted abandon. At roadside rest areas, armed with typewriters, cameras, and mutual affection, the authors composed this book.
Julio Cortázar was born in Brussels in 1914 and grew up on the outskirts of Bueno Aires. His other works include Diary of Andrés Fava, Hopscotch, Blow-Up and Other Stories, All Fires the Fire, We Love Glenda So Much, A Certain Lucas, Around the Day in Eighty Worlds and Cronopios and Famas. He died in Paris in 1984.

Anne McLean has translated works by Javier Cercas, Evelio Rosero, Juan Gabriel Vázquez, Ignacio Martínez de Pisón, Carmen Martín Gaite, Enrique Vila-Matas, and Héctor Abad, as well as Diary of Andrés Fava and From the Observatory by Julio Cortázar. She has twice won the Independent Foreign Fiction Prize.
"Despite the unpromising terrain of the autoroute, they make interesting discoveries daily. Much of the travelogue is humorous, yet it’s also a serious book about ’slow travel’ in which they subvert the autoroute’s efficiency and find adventure in unexpected places."
--Yaël Schlick, Toronto Star

"The journey undertaken by Cortázar and his wife and collaborator Carol Dunlop is quixotic in the largest sense. At one level, it is an adventure stood on its absurd head. At another, it is something graver—a mask of comedy concealing the enigma of an archaic smile."
--Richard Eder, The Los Angeles Times Book Review

"Driving a van that never leaves the motorway from Paris to Marseille, Dunlop and Cortázar explore a mysterious world full of car parks and botanical samples, crappy restaurants and their customers. A fascinating journal dedicated to ‘all the weirdos in the world’, it should take its place alongside Robert Louis Stevenson’s travel diaries."
--Nicolas Bourriaud, Frieze