The Evolution of the Human Mind: From Supernaturalism to Naturalism an Anthropological Perspective (Paperback) 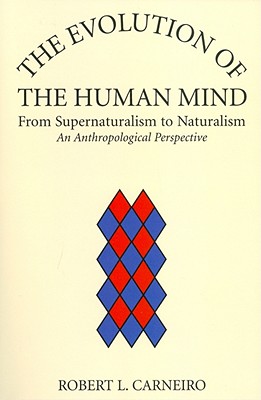 The Evolution of the Human Mind: From Supernaturalism to Naturalism an Anthropological Perspective (Paperback)


Special Order—Subject to Availability
(This book cannot be returned.)
For ages the events of human experience were explained by recourse to supernatural agents and forces. Given the rudimentary intellectual tools then available to the human race, no better explanations were possible. Over the ensuing centuries, the ideas and methods of empirical science came into being and were applied to all aspects of human experience. Conceptions of life, the world, the universe, and even of God were modified, with naturalistic interpretations challenging and supplanting supernaturalistic ones. Today the viewpoint of science is gaining ever-greater acceptance. In his eloquent new book, The Evolution of the Human Mind, Robert Carneiro traces the history of this development-from the Paleolithic to the present-vividly describing the major events that have marked this great transition in human thought. From the reviews "This book traces the development of human thought from a time when the only way of explaining things was to attribute them to the will of supernatural beings to the present day when...we can explain things without recourse to ideas lying outside the world of nature." Fiona Coward, Journal of the Royal Anthropological Institute (N.S.) 19 "An enormous achievement. Wherever I landed, whether it was the origin of 'emergence, ' Einstein's religion, the death of Platonic views of nature, or the strangely self-contradictory worldview of Julian Huxley, I learned something new. Wise, authoritative, and entertaining " Richard Milner, Author of Darwin's Universe: Evolution from A to Z "I think the book is excellent. Easy to read-both because of its writing style and the layout in relatively brief sections. This makes it a pleasure to read-and the subject is so exhilarating . . . A book to read and then keep for reference" Ken Perrott in Open Parachute "Carneiro traces the notion of 'a thoroughgoing belief in unalloyed supernaturalism toward an attitude in which naturalism played an increasingly greater role' . . . . The great debate today is between sociobiologists and cultural anthropologists to determine how much of human behavior and thought is genetically programmed and how much is culturally determined. Carneiro is firmly in the cultural camp, and longs for the day when humankind simply pursues truth and no longer seeks religious solace." G. M. Smith in Choice " I]nteresting and informative. . . . A] nicely written contribution to understanding the evolution of competing ideas." Kenneth M. Weiss in Journal of Anthropological Research " A] fine example of how pure anthropology can not only be relevant but powerful . . . The Evolution of the Human Mind is a skillfully written book that you won't regret buying. It is destined to be a classic. Carneiro makes direct statements that writers love to cite (and readers love to read)." Ira R. Wishoff in The Dirt Brothers Prepublication praise "This insightful overview by a distinguished cultural anthropologist of how humans moved from animistic and supernatural views of the universe, spawned in the infancy of the species, to a naturalistic perspective based on science, is truly inspiring." Paul Kurtz, State University of New York at Buffalo "Does God exist? What is clear is that theistic beliefs exist, and their origin and development are brilliantly illuminated here. Carneiro's subtle but enlightening treatment will be a breath of fresh air for all who find answerable questions more interesting than unanswerable ones." Robert Bates Graber, Truman State University "Carneiro's erudition is breathtaking as he explores the concept of the soul, the nature of animate supernatural creatures, the emergence of polytheism, and the rise of monotheism. The evolution of the human mind is handled magnificently in this compelling and original book." Joyce Marcus, University of Michigan
Robert L. Carneiro, American Museum of Natural History New York, New York