First Light: A POWs Rescue Mission That Can Never Be Acknowledge (Paperback) 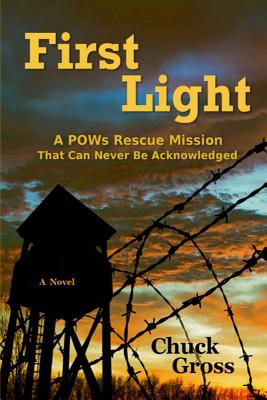 First Light: A POWs Rescue Mission That Can Never Be Acknowledge (Paperback)


Not On Our Shelves—Ships in 1-5 Days
(This book cannot be returned.)
Have you ever wondered what you would do if you were contacted by the US Government to perform a covert mission? First Light is a story about Curt Gray, an ex-Vietnam helicopter pilot, who is suddenly thrust into a secretive mission to help locate American POWs. Problem is Curt has buried his memories of the war into the dark recesses of his mind. His first thoughts are to refuse the mission, but his loyalty and patriotism will not allow him such luxury. As the mission unfolds, Curt finds himself entangled in a dark web of deception and emotional mayhem. Review: "Chuck Gross continues to capture the Vietnam experience, just like he did in Rattler One-Seven, in a way that takes me back to my own months in the jungle. After the authenticity of Rattler One Seven, Chuck, in his new novel, weaves reality into a story that will leave the reader wondering is it fiction or reality? My bet is on . . ." -- Barry Rice, President of the Tennessee State Council, Vietnam Veterans of America.
Chuck Gross is the bestselling author of "Rattle One-Seven, A Vietnam Helicopter Pilot's War Story". Chuck flew helicopters in Vietnam where he was shot down twice and logged more than 1,200 hours of combat flying. After the war, he continued his career in aviation as a commercial pilot and retired as an American Airlines 767/757 Captain. Chuck currently is an instructor in the martial arts and teaches flight instruction. He resides in Tennessee.