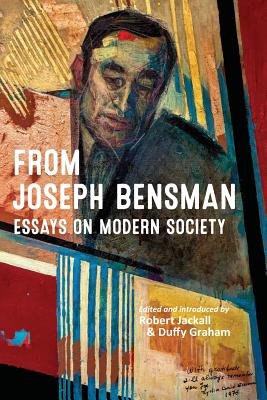 
Special Order—Subject to Availability
Joseph Bensman (1922-1986), a renowned analyst of modern institutions, professions, and culture, was Distinguished Professor of Sociology at the Graduate Center, City University of New York, and at City College of New York. From Joseph Bensman: Essays on Modern Society brings together some of his finest work, often done in collaboration with colleagues such as Arthur J. Vidich, Robert Lilienfeld, Bernard Rosenberg, and Israel Gerver.

In the introduction to this volume, editors Robert Jackall and Duffy Graham identify Bensman’s trademark habits of mind: an analytical stance, fundamentally objective and dispassionate; a vigilant awareness of the reach and vitality of bureaucracy; an ability to discern intellectual problems in superficially unremarkable phenomena; attention to empirical detail and suspicion of theoretical abstractions; and appreciation of irony and unintended consequences.
Robert Jackall is Willmott Family Professor of Sociology and Public Affairs at Williams College. He is the author of Moral Mazes: The World of Corporate Managers
and Street Stories: The World of Police Detectives, among other books. Duffy Graham is the author of The Consciousness of the Litigator.