Our Musical Heritage: From "Yankee Doodle" to Carnegie Hall, Broadway, and the Hollywood Sound Stage (Paperback) 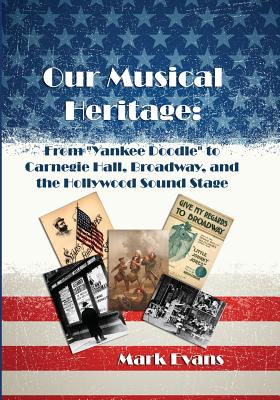 Our Musical Heritage: From "Yankee Doodle" to Carnegie Hall, Broadway, and the Hollywood Sound Stage (Paperback)


Not On Our Shelves—Ships in 1-5 Days
(This book cannot be returned.)
America has a rich musical heritage, but it is in danger of falling into an undeserved oblivion. Classical music, jazz, film scores, and the masterpieces of musical theater are an essential part of our history. "Our Musical Heritage" by Mark Evans explores America's musical past, provides a link to our musical present, and distills the essence of our nation's musical spirit from the music itself. From unsung heroes to the musical giants of the modern age, meet the composers, conductors, performers, and teachers who gave us an incredible legacy. "Our Musical Heritage" guides you on an exciting journey of discovery that can make the world of music a part of your daily life.American concert music has pursued a unique journey. "Our Musical Heritage" introduces a musical Founding Fathers, Francis Hopkinson, the composer who signed the Declaration of Independence, Francis Scott Key who wrote the words to "The Star Spangled Banner." and John Philip Sousa, the March King. We meet Lowell Mason, the father of music education in the United States and the important composers and conductors who devoted their lives to pursuing a truly American style of music, from "Yankee Doodle" to Carnegie Hall, we must rediscover our musical history. Jazz has been called America's classical music. From the early days of pioneering African American musicians in New Orleans through the masters of stride piano in Harlem, from the swing era of big bands through the age of bebop, jazz evolved as a unique art form. Jazz is defined by two elements, improvisation (simultaneous composition and performance) and swing. The finest jazz musicians created a legacy that has traveled around the world. American musical theater was born of Viennese operetta, British music halls, immigrants from Ireland, Austria, Germany, Hungary, and Russia, the sounds of jazz from New Orleans to Chicago, the folk-songs of African Americans, and even the Italian operatic tradition. From this musical melting pot, a remarkable group of composers, lyricists and playwrights fashioned a musical genre and a Great American Songbook quite unique with skill, technique, imagination, and a touch of magic. Music in the movies comes from the pens of the talented composers who have written the scores that give life, energy, and emotion to motion pictures, which have captivated audiences around the world. This book was written to introduce your children or grandchildren to our musical heritage. They may not discover it on their own; it will be their loss, but also ours. Whether you are an experienced musical traveler or a first-time explorer, this book may inspire you to take many more musical journeys every day.
Dr. Mark Evans is a composer, conductor, pianist, and organist with a multifaceted background in music, writing, broadcasting, and education. He literally grew up in the world of film music in Hollywood and his book, "Soundtrack: The Music of the Movies" has been recognized as the definitive book on the history of film scoring. As a writer and lyricist, he has written numerous books for adults and children and has collaborated on books with such varied personalities as Robert Stack and Xavier Cugat. He is the author of "Mark! My Words: How to Discover the Joy of Music, the Delight of Language, and the Pride of Achievement in the Age of Trash Talk and MTV." Audiences and readers have been "marking his words," in his newspaper column in The New York City Tribune and on his popular radio and television programs. He saw the need to create Cultural Conservation, a foundation "dedicated to the principle that society should preserve its cultural resources with the same care and devotion that a nation devotes to its natural resources."