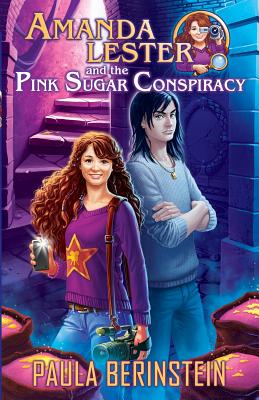 This is book number 1 in the Amanda Lester series.

Twelve-year-old Amanda Lester wouldn't be caught dead going into the family business. Just because she's related to Inspector G. Lestrade, that bumbler who sometimes worked with master sleuth Sherlock Holmes, doesn't mean she should become a detective and give up her dream of becoming a filmmaker. Unfortunately, her plans are in jeopardy. Her latest project with the Stick Dog Filmmakers Club and Production Company isn't coming together, and her control freak tendencies have driven away all her actors. If she doesn't make a winning film soon, her parents will insist that she go into the L.A.P.D. young cadets training program, and her budding career will be over. So when Herb and Lila Lester suddenly send her to a secret English school for the descendants of famous detectives, Amanda resists-until she and her new friends notice drops of blood and weird pink substances in odd places. Are these strange happenings clues to a real mystery or simply part of the elaborate class project the teachers assign every year? The answer comes all too soon. When Amanda's father disappears and the school's cook is found dead with her head in a bag of sugar, the kids are certain that crimes are taking place. Now Amanda must embrace her destiny and uncover the truth. The only snag is that arch-villain Blixus Moriarty, a descendant of Holmes's nemesis Professor James Moriarty, might be involved, and he doesn't like nosy little girls interfering in his business.