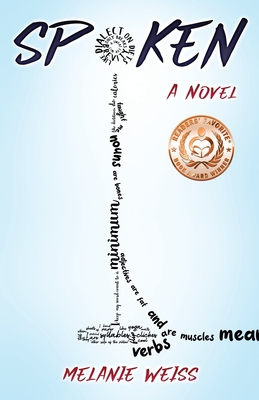 "While a story of self-discovery, Spoken lends itself to a different curricular option for teachers, a world of possibilities to young readers, and a special inspiration to biological parents. I really enjoyed Spoken."-- Readers' Favorite Review

High school freshman Roman Santi has everything -- good looks, great friends, a mansion with an infinity swimming pool -- except the one thing he really wants. A relationship with his father.

When Roman's life gets turned upside down, (thanks, Mom ?), he is forced to leave his pampered Hollywood lifestyle and move into his grandparents' Midwestern home. Sleeping on a lumpy pullout sofa and starting at a new high school is the worst, but Roman's life starts to look up when his pink-haired friend, Zuzu, and his crush, a classmate named Claire, introduce him to performance poetry through the high school's Spoken Word Club. While his mom is flying back and forth to L.A., trying to return them to the life they had, Roman becomes part of a diverse group of characters who challenge his rather privileged view of the world. Through Spoken Word, Roman recognizes the hole in his own life he needs to fill and discovers his voice. Spoken Word leads Roman on a journey of new friendships, first love, and finding the dad he never knew.

Melanie Weiss lives and works in Oak Park, Illinois. This is her first novel, but it won't be her last. www.melanie-weiss.com