Wild Among Us: True adventures of a female wildlife photographer who stalks bears, wolves, mountain lions, wild horses and other elus (Paperback) 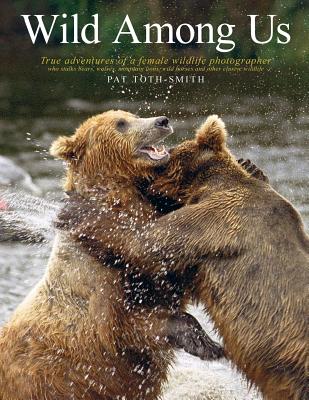 Wild Among Us: True adventures of a female wildlife photographer who stalks bears, wolves, mountain lions, wild horses and other elus (Paperback)


Not On Our Shelves—Ships in 1-5 Days
(This book cannot be returned.)
***USA BEST BOOK AWARD, E-LIT BRONZE MEDAL AWARD & LIVING NOW GOLD MEDAL WINNER.
"Have you ever been stalked by a bear? Pat Toth-Smith has and lives to tell her story. Her book brings the outdoors indoors, the untamed animals into your living room, and tantalizes your imagination by her brilliant storytelling. Her exploits, combined with the award-winning photography, create an experience to behold; reading that is not just for the passing of time." Suzanne Gattis, Pacific Book Review "Wild Among Us" is full of the hazardous encounters Pat, a young female photographer has faced in the field. Experiences of being cornered by two large bull moose, growled at by a grizzly mom protecting her cub, and a prolonged stare down by an over 1.000-pound grizzly bear on a remote trail in Alaska. Her encounters not only include the perils associated with stalking wildlife but also the sometimes-dangerous situations she navigates as she travels the highways alone with human predators. In the end it all seems worth it when we see the results of her labors, the stunning wildlife photos, the vivid observations of the animals' behavior and the hard-earned knowledge gleaned of the job. Pat has always lived by the motto, " I always feel it is worse for me to allow my fears to stop me from doing what I want to do, then to do it and fail.
Pat Toth-Smith grew up in New Jersey and moved to California in her late 20's and embarked on an adventurous and sometimes dangerous career photographing hard to find North American wildlife such as bears, wolves, cougars and other wildlife. "I have always felt it was worse to never do something because I was afraid to do it, then to do it and fail. So I pushed myself to do what I love, photographing wildlife." Her bear and other wildlife photographs have sold in numerous galleries throughout the West, and in hundreds of fine art shows. A featured artist in Wildlife Art magazine in 2005, Pat also was a guest artist at Yosemite's Ahwahnee Hotel in 2008, and has sold her work in Yosemite, Sequoia and Kings Canyon National Parks. After appearing in multiple newspaper articles in the San Francisico Bay area, she has become a featured guest speaker at conferences and educational events.