In Movement There Is Peace: Stumbling 500 Miles Along the Way to the Spirit (Paperback) 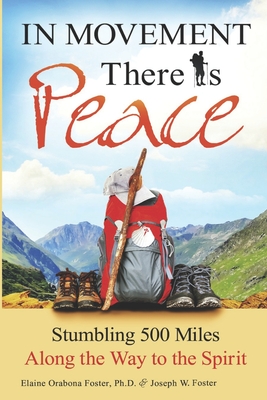 In Movement There Is Peace: Stumbling 500 Miles Along the Way to the Spirit (Paperback)


Not On Our Shelves—Ships in 1-5 Days
(This book cannot be returned.)
This award-winning best seller will rock your beliefs about fear, security and taking risks.In Movement There is Peace is a powerful tale of travel, adventure and unexpected faith while backpacking along the Camino de Santiago.

It begins with a doctor who walks away from her practice in order to cure her own paralyzing anxiety. Once free, she discovers that leaving is really only fleeing if there's no new direction. Could this be the reason for her husband's sudden inspiration?

"I want us to walk the Way of Saint James, it's an 800 kilometer pilgrimage across northern Spain."

After deliberating the wisdom of walking 500 miles with no planning or physical conditioning and little religious faith, the two set off on a journey of a lifetime.

Their "no-plan" plan triggers a series of extraordinary events that can only be explained as divine intervention. It starts with an enigmatic suggestion from a former pilgrim who sends them off with a caution: "There are no coincidences on the Camino."

The tale itself is a funny, fascinating pilgrim's progress seeded by unique characters and amazing surprises. Follow along the pilgrim's path as it shares its secrets on how to: If you've ever doubted yourself or your abilities, read this book and flip the fear.
ELAINE ORABONA FOSTER is one of the first 10 prescribing psychologists in the US. She holds a Diplomate in Clinical Psychology and is a Fellow of the American Psychological Association (APA). Elaine received a B.A. in psychology from New York University and a Ph.D. from Nova University. She completed a Fellowship at the Uniformed Services University of the Health Sciences (USUHS) in Psychopharmacology. She's worked extensively with soldiers afflicted with Posttraumatic Stress Disorder and Traumatic Brain Injury. Elaine has taught classes and symposia on women's issues, anxiety, depression, and cultural factors in medicine throughout the US, Canada and Europe. She has contributed to several books including: The Psychologist's Desk Reference, Pharmacotherapy for Psychologists: Prescribing and Collaborative Roles, and Trauma Psychology [2 volumes]: Issues in Violence, Disaster, Health, and Illness. In her spare time, Elaine enjoys pushing through the limits of her own anxiety by traveling to places far off and unknown. JOSEPH FOSTER has had a passion for adventure his entire life, it's led to his now popular saying, "Getting lost is just an excuse to explore." He's an engineer and a scientist but most of all, an experienced adventurer. He's hiked, sailed and flown all over the world; searching for unique places to explore. Whether it's sailing an open sea or climbing a mountain, he's always exploring his physical and emotional limits. As a divemaster, he's trained scuba divers, teaching them how to combat the anxieties that sap their emotional strength and endurance. As a flight test engineer, he's tested new aircraft technologies during high speed flight in low altitude, mountainous terrain. While solo sailing across open oceans, he's faced long periods of isolation, extreme weather conditions and critical gear failures. At the end of his journeys he's always walked away with a comforting peace of mind and a wonder of what's next ... at least up until he walked 500 miles along the Camino de Santiago.