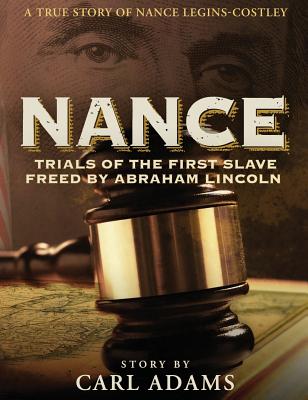 The "Trials of Nance" is the true story of the three Supreme Court Trials of Mrs. Nance Legins-Costley (1813-1873) in Illinois. The dramatic non-fiction narrative is based on the original sworn and witnessed court records written with quill and buried deep in the Archives of the Illinois Supreme Court and other record depositories.

This is the only known historical biography to receive awards from an African-American Museum as well as the Illinois State Historical Society. The editor of the Illinois History Journal claimed this is the only story about Abraham Lincoln that is really new. The truth of the story was actually buried by white supremecist attitudes for over 100 years. Nance actually tried to free herself, but need lawyer Lincoln to make it legal.

Nance's struggles began as a teenager and it took 15 years to win her freedom. Nance is the only known slave in American history who managed to get to a state supreme court THREE times. It was discovered there are more old records on Nance than any other Illinois slavery case. The result is the book holds a piece of history to own, a copy of Nance's original signature from her historic testimony in 1827, ten years before Abraham Lincoln became a lawyer...and Nance risked everything for the sake of her eight children, both born and the unborn.