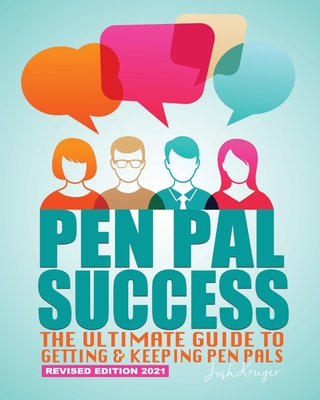 
Not On Our Shelves—Ships in 1-5 Days
(This book cannot be returned.)
Revised Edition 2021
Newly Added LGBTQ Pen Pal Section Contained within 20 information-filled chapters you'll discover the following secrets: 1. How to find FREE pen pals that are willing to write prisoners. 2. Make money legally in the pen pal world without running any bogus prison scams 3. Effectively use online pen pal websites, including a guide to which ones actually work, plus real profiles the author used to get HITS 4.What to do once you get a pen pal to become lifelong companions 5.How to write letters to pen pals that get you responses One successful letter can get you multiple responses from different pen pals. 6. Learn the website that the author used to get 20+ hits in the first week his profile was up 7. Find out some of the biggest myths in the prison pen pal game and how not to fall victim or waste your money 8. How to rekindle a lost pen pal correspondence and keep pen pals coming back for more. 9. Get your pen pal to write you hot, sexy letters and send you sexy photos without paying 10. The act of giving gifts so you don't look like a trick-off artist.What's more, this book is jam-packed with the full contact information of the people and companies that can help you succeed today And There's Much, Much More.
In 1999, Josh Kruger was arrested for felony murder, home invasion, and robbery. At the subsequent bench trial in 2000, he received a direct verdict of acquittal, when the state refused to participate over an evidence dispute. Kruger was released, but eventually rearrested and convicted in a 2003 jury trial and sentenced to life in prison. After reading several of Zig Ziglar's books, Kruger reached out to the late, great motivational speaker and began corresponding with Ziglar. He adopted Zig's philosophy that you can have everything you want in life if you just help enough people get what they want. Tired of depending on friends and family for support, the graduate of Crown Financial Ministries decided to leverage his extensive juvenile and adult prison experiences into a freelance writing career. In 2011, Kruger launched his micropublishing empire from his maximum-security prison cell by self-publishing two booklets, How to Get FREE Pen Pals and How to Win Your Football Pool. Prison authorities seized his property and threw him in segregation by alleging that he was violating prison rules. Not to be dismayed, Kruger kept going and published his first book, The Millionaire Prisoner to help prisoners find their cellpreneurial calling and to look for the opportunities in life instead of the obstacles. This is his second book and is based on his own personal experiences from behind the iron veil of prison. His mission is to change lives, one prisoner at a time. He can be reached at millionaireprisoner@gmail.com. Sorry, he's not allowed to write prisoners directly.