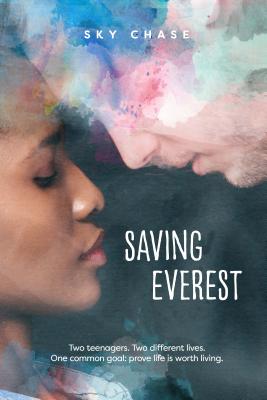 From the outside, Everest has it all, but there’s only one person who can see him for who he truly is . . . and it changes his life forever.

In this tender, poignant debut novel by newcomer Sky Chase, two teenagers on the cusp of adulthood learn to embrace life in ways neither of them ever anticipated.

Everest is the most popular boy in school. He’s handsome, wealthy, and captain of the football team—he has the world at his fingertips, but he’s desperately unhappy. And when those feelings become too much to bear, he tries to take his own life.

On the surface, Beverly’s different from Everest in every possible way. She’s quiet, shy, hard working, and keeps to herself on campus, focusing on her schoolwork and her part-time job, distracting herself from her less-than-perfect upbringing.

When Everest returns to school after his attempt, he’s in more pain than ever. Discarded by his friends, he draws little empathy and too much attention from those who surround him. But when Beverly and Everest meet unexpectedly in a dusty corner of the old library, they discover together just how rich life can be when given the freedom to just be yourself.

Sky Chase is a young author who grew up in the vibrant city of Pittsburgh, Pennsylvania. She’s been telling stories since before she could read, but when she joined Wattpad, she found a safe place to create and a platform on which she could advocate for mental health. When Sky’s not writing, she can be found counting the constellations from her window, scribbling song lyrics on napkins, and visiting her local animal shelter. Saving Everest is her first novel.