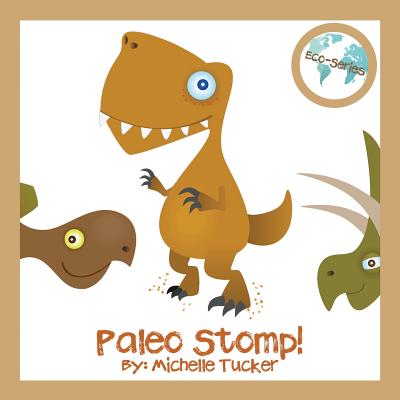 This is book number 1 in the Eco series.

If your little one is too young for "Jurassic World", but still want to have some Dino fun, then Paleo Stomp is right up your alley. And no, it has nothing to do with the Paleo Diet, Paleo Snacks, or Paleo Wraps (although the Brontosaurus could lose a few pounds) Rather it is a fun tale about the Paleozoic Era and a friendly raptor squad.

Dinosaurs love to Stomp Come join a ""Trex"" or two and their entourage for this Paleo Era, Jurassic, Epic Dance Party Don't forget the balloons

You'll be eager to read other books by Michelle Tucker such as Dogs Can't Paint and Harrison. And if your child is a fan of Dragons, Dinosaurs and other Prehistoric Reptiles, or just loves to stomp, then Paleo Stomp is the perfect addition

Paleo Stomp is part of the Eco-Series lineup - which encourages little ones to honor our beautiful Earth and it's incredible animals.