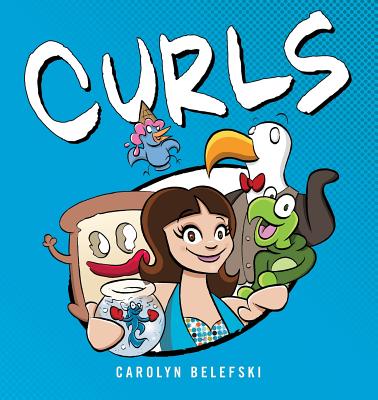 Carolyn Belefski is a cartoonist and the creator of the comic strip, Curls, featuring a gal named Curls who dreams of adventurous situations that come to play in real-life with a gang of her animal friends and a giant piece of toast. Carolyn's illustration and design work has appeared in magazines, newspapers, comic books, and national advertising campaigns. Carolyn is known for her fluid linework, playful illustrations, and charming characters.

In 2010 Curls was nominated for the Friends of Lulu Kim Yale Award to recognize women in cartooning. In 2013, 2014, and 2015 Carolyn was voted "Best Visual Artist" runner-up for Washington City Paper's Best of DC awards.

In 2012 Carolyn became a National Cartoonists Society member and is co-chair of the Washington, DC chapter. She initiated the "Cartoonists Draw Blood" drive with the American Red Cross. At the event, blood donors have the opportunity to meet several talented cartoonists and receive a sketch.

She also collaborates with writer Joe Carabeo on the comic books Kid Roxy, Black Magic Tales, and The Legettes.

Boom Studios, Clorox, National Geographic, and The White House are some of the clients Carolyn has worked with.