The Dancing Chameleons: Literacy on the Move: Book 1 (Hardcover) 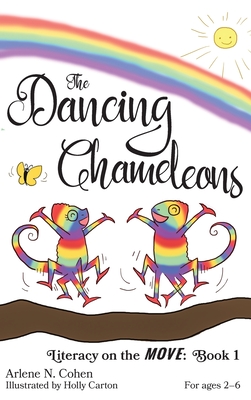 The Dancing Chameleons: Literacy on the Move: Book 1 (Hardcover)

From the author of Stories on the Move: Integrating Literature and Movement with Children from Infants to Age 14 (over 1,500 sold and used by parents, teachers, and librarians internationally), Arlene Cohen has created the Literacy on the Move Series: entertaining picture books that develop literacy skills. The first in the series for 2-6 year olds, is The Dancing Chameleons. Also see The Dancing Reptiles for 4-8 year olds, and The Dancing Dogs for 6-10 year olds. All are now available on Amazon.

Bored being just verde (green) on a leaf or marron (brown) on a trunk, Carlos the Chameleon ventures out on a limb to see and be more colors. He turns amarillo (yellow) when he dances La Mariposa Mambo with the yellow butterfly, roja (red) when he dances La Rumba Rosa with the red roses, and purpura (purple) when he dances El Tulipan Tango with the purple tulips. Life is exciting now Carlos, the multi-colored chameleon dances all over the limb, singing loudly, "Life is exciting. Life is Fun. When you're out on a limb; out in the Sun." He draws the attention of his friends back at the trunk. They tell him he better stop that nonsense or he might get caught and fried in a tortilla. But, that doesn't stop Carlos for very long. He heads back out to the limb. On the way, he makes a new friend, Carmelita who also loves to dance. She joins Carlos out on the limb until they get captured in a glass jar by a hiker. Will they get fried in a tortilla? No worry, the hiker has big plans for them. They are released into his beautiful backyard garden where they will entertain and enchant the whole neighborhood with their unique dance routines.

Children easily learn new words in Spanish and English as they simultaneously develop movement agility and an appreciation of literature. Developmental biologist/educator, Charles Piaget's research revealed that movement is a central part of the learning experience. As a dancer and librarian, Arlene incorporates creative movement with early literacy skills to entertain and develop whole children. This is also a concept book that includes learning colors in English and Spanish.