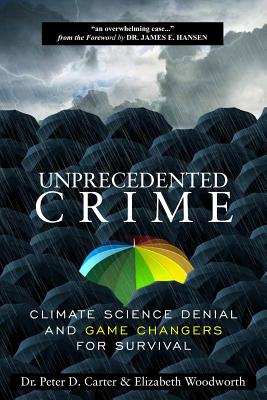 
Special Order—Subject to Availability
In 2017, the heat waves, extreme wild fires, and flooding around the world confirmed beyond doubt that climate disruption is now a full-blown emergency. We have entered Churchill's "period of consequences", yet governments have simply watched the disasters magnify, while rushing ahead with new pipelines and annual trillions in fossil fuel subsidies. Governments simply cannot say they did not know. The events we are seeing today have been consistently forecast ever since the First Assessment by the Intergovernmental Panel on Climate Change, which was signed by all governments back in 1990, and which has been described as the best evaluation project ever designed. Unprecedented Crime first lays out the culpability of corporations, governmental, political and religious bodies, and especially the media through their failure to report or act on the climate emergency. No emergency response has even been contemplated by wealthy high-emitting national governments. Extreme weather reporting never even hints at the need to address climate change -- even though it is producing wars and migrations among the world's poorest, those who have contributed the least to global warming. Yet, independently of governments, scores of proven zero-carbon game changers have been coming online all over the world. These exciting technologies, described in the book, are now able to power both household electricity and energy-dense heavy industry. We already have the technical solutions to the CO2 problem. With these solutions we can act in time to reduce greenhouse gas emissions to near-zero within 20 years. These willful crimes against life itself by negligent governments, the oblivious media and an insouciant civil society are crimes that everyday citizens can readily grasp -- and then take to the streets and to the courts to protest on behalf of their children and grand-children. This thoroughly researched and highly-documented book will show them how. Co-author Dr. Peter Carter is an expert reviewer for the Intergovernmental Panel on Climate Change (IPCC).