A quantum battery that never runs out: A practical application of a QVF battery (Hardcover) 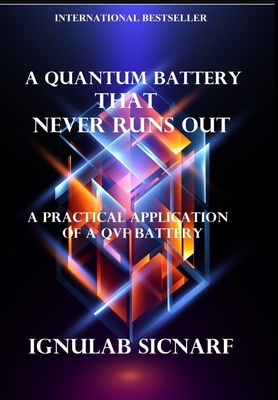 A quantum battery that never runs out: A practical application of a QVF battery (Hardcover)

Are you tired of charging your smartphone everyday? Are you tired of using the regular generators and its maintenance cost? Are you still facing the problem in improper current supply? Do you worry about the peak electric bills? Here is the solution in the practical application of a QVF battery that helps you in getting rid of power problems.

The QVF Battery was discovered by Ignulab Sicnarf as detailed down in this bestselling book. It is a simple and powerful battery that allows anyone to generate hundred percent free energy during day and night anywhere in the world. It works in submarine and in aeroplane using a weird source of energy. It is a step-by-step procedure that helps you to build the battery. You can power up any of your home appliance that is light and portable.

This book is the culmination of two years of work that I have done to develop this new battery. I had never expected it would take anything like as long, but I have discovered vastly more than I ever thought possible, and in fact what I have done now touches almost every existing problem in energy.

In the early years, I published some papers in the major scientific research journals which were well received but because they had become scattered, I resolved just to keep working quietly until I had finished, and was ready to present everything in a single coherent way. Two years later this book is the result. And with it my hope is to share what I have done with a wide range of scientists and non-scientists as possible.

And now that I have finished building the intellectual structure that I describe in this book, it is my hope that those who read these words can share in the excitement I have had in making the discoveries that were involved.