Fascism in Brazil: From Integralism to Bolsonarism (Routledge Studies in Fascism and the Far Right) (Paperback) 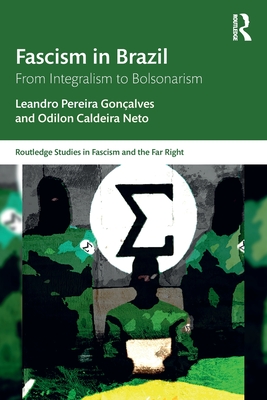 Fascism in Brazil: From Integralism to Bolsonarism (Routledge Studies in Fascism and the Far Right) (Paperback)

Fascism in Brazil analyzes the long and varied history of the Brazilian extreme right.

The book examines integralism, the main historical Brazilian fascist ideology represented by Brazilian integralist Action, the largest fascist movement outside Europe. It analyzes the Integralist tradition from its founding in 1932 to the present day. It examines how Brazilian integralist Action began with its leader Pl nio Salgado's trip to Fascist Italy, and how the Popular Representation Party developed integralism in the postwar era. The book also explores the support of integralists for the 1964 military coup and the role of integralists in the dictatorship. The contemporary extreme right in Brazil is still inspired by the integralist slogans of the 1930s as they seek to find political space and to demonstrate their strength. Contemporary turning points in neo-integralism were the involvement of neo-fascist groups, including neo-integralists, in the upheavals that culminated in the election of Brazilian President Jair Bolsonaro, as well as in the attack on the headquarters of comedy group Porta dos Fundos in Rio de Janeiro in 2019.

This book will be of interest to students and scholars researching comparative fascist studies, the history of the far right, and Brazilian and Latin American history and politics.