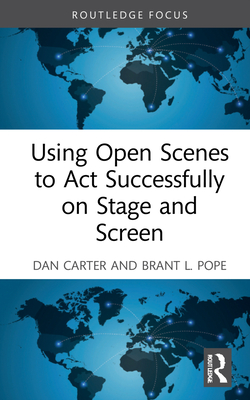 Using Open Scenes as a "way in" to scripted material, this book establishes a foundational actor training methodology that can be applied to the performance of film or television acting, commercials, and theatrical realism.

Unlike other methodologies, this unique approach is devoid of casting considerations or imposed identity, providing actors opportunities that do not rely on nor are restricted by age, gender, race, ethnicity, regional accent, body type, identity, or other defining or delimiting aspects that come into play during the casting process. This allows the actor to focus on personal authenticity as they develop their skills.

This book will appeal to undergraduate students, acting teachers, and the contemporary actor seeking a career in film, television, or other electronic media.

Dan Carter was Director of the Penn State School of Theatre for 22 years. Previously he was Associate Dean of Theatre at Florida State and Chair of Theatre at Illinois State, where he also served as Producing Director of Illinois Shakespeare Festival. He served as president of both the National Association of Schools of Theatre and the National Theatre Conference and Dean of the College of Fellows of the American Theatre. Acting credits include Smokey and the Bandit II, Cannonball Run, Mister Roberts (Martin Sheen), Butterflies Are Free (Farrah Fawcett), and Richard III (Al Pacino).Brant L. Pope is a professional actor and director. His work has been seen Off-Broadway, in regional theatre, and in film and television. For 11 years, he served as Director of the FSU/Asolo Conservatory and Associate Artistic Director of the Asolo Theatre Company in Sarasota, Florida. He later served as Chair of the Department of Theatre and Dance at The University of Texas at Austin from 2010 to 2019. He has been the President of the University Resident Theatre Association (URTA) and is member of Actors Equity Association (AEA) and Stage Directors and Choreographers (SDC).