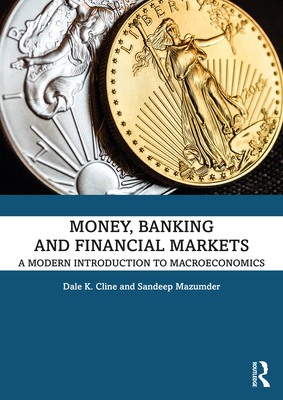 
Not On Our Shelves—Ships in 1-5 Days
(This book cannot be returned.)
This innovative text offers an introduction to money, banking, and financial markets, with a special emphasis on the importance of confidence and trust in the macroeconomic system. It also presents the theory of endogenous money creation, in contrast to the standard money multiplier and fractional reserve explanation found in other textbooks. The U.S. economy and financial institutions are used to explain the theoretical and practical framework, with international examples weaved in throughout the text. It covers key topics including monetary policy, fiscal policy, accounting principles, credit creation, central banks, and government treasuries. Additionally, the book considers the international economy, including exchange rates, the Eurozone, Chinese monetary policy, and reserve currencies. Taking a broad look at the financial system, it also looks at banking regulation, cryptocurrencies, real estate, and the oil and gold commodity markets. Students are supported with chapter objectives, key terms, and problems. A test bank is available for instructors. This is an accessible introductory textbook for courses on money and banking, macroeconomics, monetary policy, and financial markets.
Dale K. Cline is a CPA in public practice, a CMA, a business owner, and an investor. He holds an undergraduate degree from Lenoir-Rhyne College and an MBA from Wake Forest University. While he has a wealth of business knowledge gained through his client advisory role, he learned much of what he knows about the economy through hands-on experience. Most recently, navigating his real estate investment and development business through the Great Recession provided him with unique insight into the way the banking system and the economy respond to stress. Viewing the meltdown from the dual perspectives of a CPA and a market participant prompted him to embark on a study of the lesser understood intricacies of the economy that culminated with the writing of this book.Sandeep Mazumder received his BA in Economics from St. Catharine's College at Cambridge University. He earned his MA and PhD in Economics from Johns Hopkins University. His research and teaching interests include macroeconomics, monetary economics, international monetary economics, and time-series econometrics. Sandeep has focused much of his research on U.S. inflation dynamics and the Phillips Curve, and has published in journals such as the Brookings Papers on Economic Activity, Macroeconomic Dynamics, and the Journal of Money, Credit and Banking. He was a Professor in the Department of Economics at Wake Forest University for 12 years, where he also served as Department Chair for several years. Since 2021 he has been the William E. Crenshaw Dean of the Hankamer School of Business at Baylor University. In addition, he also is an Associate Editor of the Journal of Macroeconomics, a position he has held for several years.