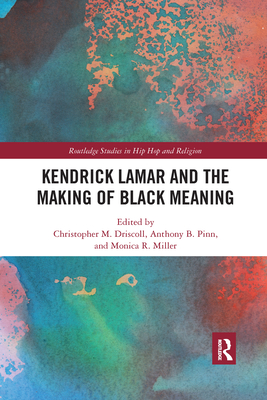 Kendrick Lamar has established himself at the forefront of contemporary hip-hop culture. Artistically adventurous and socially conscious, he has been unapologetic in using his art form, rap music, to address issues affecting black lives while also exploring subjects fundamental to the human experience, such as religious belief. This book is the first to provide an interdisciplinary academic analysis of the impact of Lamar's corpus. In doing so, it highlights how Lamar's music reflects current tensions that are keenly felt when dealing with the subjects of race, religion and politics.

Starting with Section 80 and ending with DAMN., this book deals with each of Lamar's four major projects in turn. A panel of academics, journalists and hip-hop practitioners show how religion, in particular black spiritualties, take a front-and-center role in his work. They also observe that his astute and biting thoughts on race and culture may come from an African American perspective, but many find something familiar in Lamar's lyrical testimony across great chasms of social and geographical difference.

This sophisticated exploration of one of popular culture's emerging icons reveals a complex and multi faceted engagement with religion, faith, race, art and culture. As such, it will be vital reading for anyone working in religious, African American and hip-hop studies, as well as scholars of music, media and popular culture.