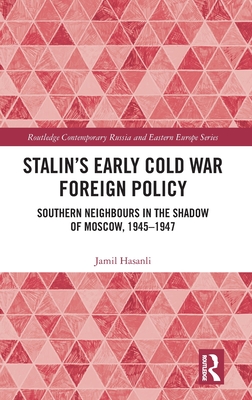 Immediately after the Allied WW2 victory in Europe, claims were made by the Soviet Union over the eastern regions of Turkey, to secure direct control over the Bosporus, Dardanelles, and Turkish Straits. The detailed study of the international components of these events, featuring the veiled complexities of Stalin's anti-Turkish diplomacy, provides a key to understanding crucial aspects of these Soviet territorial claims.

Iranian Azerbaijan became another hotspot of post-war confrontation between the western Allies and the USSR: Soviet policy towards Iran manifested in the desire to access their oil resources. A further direction emerging within Soviet post-war strategy was the Kurdish issue in the Near and Middle East. At the conjunction of Turkish and Iranian events, Soviet secret service bodies and diplomatic institutions exploited their strengths and toyed with Kurdish minorities in the region. Their decisions placed the bordering regions of China, Turkey, and Iran squarely in the shadowy reaches of Moscow's policy.

This research uses newly discovered archive material to illustrate the underlying intrigue behind Soviet ambition and intimately tracks how the Soviet Union was defeated in the first Cold War confrontation over its southern borders. It also links events of this period with the critical issue of Uyghur assimilation, and further contemporary developments highlighting Putin's policies, making it invaluable for both academic and general readers.

Dr. Jamil Hasanli is a research fellow at the SAS - IHR of the University of London. His monographs have been published in the United States, United Kingdom, Azerbaijan, Russia, Turkey, Iran, and Hong Kong. He is an honorary member of the Turkish Historical Society and American Historical Association.