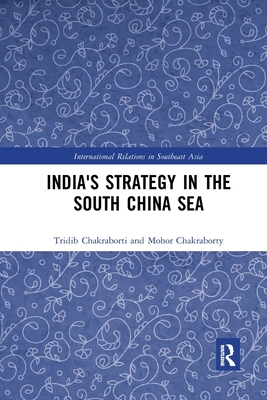 The tensions in the South China Sea pose considerable challenges to the rules-based liberal international maritime order. The situation demonstrates the interplay between maritime nationalism and geostrategic rivalry; fuelling militarisation and endangering freedom of navigation, over-flight and exploitation of natural resources. China's dedicated terraclaims, land reclamation and island-building spree - enhanced with military surveillance, communications and logistics infrastructure-building in the form of port facilities, military installations and airstrips - have escalated these tensions. China declares that these territories are an integral part of its core interests, taking an uncompromising stance on the question of sovereignty and its determination to protect the domain militarily. India, although not a South China Sea littoral state, sees both the general principle of the rules-based order and the specific issue of navigation between the Indian and Pacific Oceans as core to its own national interest.

Chakraborti and Chakraborty assess the rationale and implications of India's strategies and responses vis- -vis the South China Sea dispute, and their impact on its overall Act East initiative in Southeast Asia policy. They also analyse the implications of India's stance on the Association of Southeast Asian Nations (ASEAN), five member-states of which (Brunei, Indonesia, Malaysia, the Philippines and Vietnam) are involved in territorial disputes with China in the South China Sea. The analysis focuses on the administrative tenures of both the United Progressive Alliance from 2004 until 2014 and the National Democratic Alliance from 2014 onwards.

Tridib Chakraborti is Professor and Dean of the School of Social Sciences at ADAMAS University, Kolkata, India. He served as Professor and Head of the Department of International Relations at Jadavpur University, Kolkata before taking his present position. He has been the Indian Council for Cultural Relations (ICCR) Chair and the Indian Studies and Visiting Professor at Dublin City University, Ireland. He is an expert on South, Southeast Asian and Indo-Pacific affairs and specialises in South and Southeast Asian politics, foreign relations, strategic issues, Indian Diaspora and ethnic issues in Southeast Asia. Mohor Chakraborty is Assistant Professor in Political at South Calcutta Girls' College (affiliated to the University of Calcutta), Kolkata, India. Prior to this assignment, she held the position of Senior Research Fellow in the Department of International Relations at Jadavpur University, Kolkata. Her research interest is in Indian foreign policy and Area Studies, focusing on South Asia, Southeast Asia and the Indo-Pacific regions.