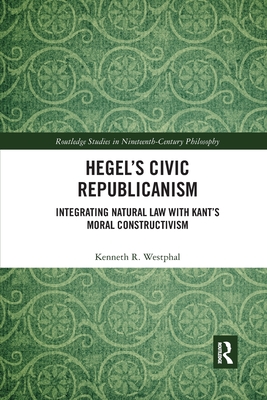 In this book, Westphal offers an original interpretation of Hegel's moral philosophy. Building on his previous study of the role of natural law in Hume's and Kant's accounts of justice, Westphal argues that Hegel developed and justified a robust form of civic republicanism. Westphal identifies, for the first time, the proper genre to which Hegel's Philosophical Outlines of Justice belongs and to which it so prodigiously contributes, which he calls Natural Law Constructivism, an approach developed by Hume, Rousseau, Kant, and Hegel. He brings to bear Hegel's adoption and augmentation of Kant's Critique of rational judgment and justification in all non-formal domains to his moral philosophy in his Outlines. Westphal argues that Hegel's justification for the standards of political legitimacy successfully integrates Rousseau's Independence Requirement into the role of public reason within a constitutional republic. In these regards, Hegel's moral and political principles are progressive not only in principle, but also in practice. Hegel's Civic Republicanism will be of interest to scholars of moral philosophy, social and political philosophy, philosophy of law, Hegel, eighteenth- and nineteenth-century philosophy.