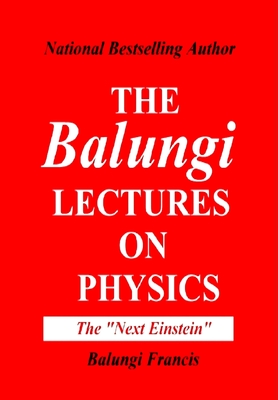 This is a National bestselling physics textbook based on some lectures by Balungi Francis, a Quantum Gravity researcher who has sometimes been called ―The Next Einstein‖. The lectures were presented before graduate students at the College of Engineering, Design, Art and Technology (Makerere), during 2012-2014, Ranging from the most basic principles of Newtonian physics through such formidable theories as general relativity and quantum mechanics, explaining dark matter and developing a quantum theory of gravity. Balungi's lectures stand as a monument of clear exposition and deep insight. Timeless and collectible, the lectures are essential reading, not just for students of physics but for anyone seeking an introduction to modern physics. Not since the Feynman lectures on physics has physics been so vividly, intelligently and entertainingly revealed.

If you have bought Balungi's " A New Kind of Physics" book, please don't pay for this book because the contents are almost the same in both books except only for the added three sections:

18. The Spectrum of the Atomic Universe 220
19. On the Generalization of Loop Quantum Gravity 228
20. An Exceptionally Simple Classical Unified Field Theory 233