First Win: How Friendship and a Bit of Kindness Makes Every Team Stronger (Hardcover) 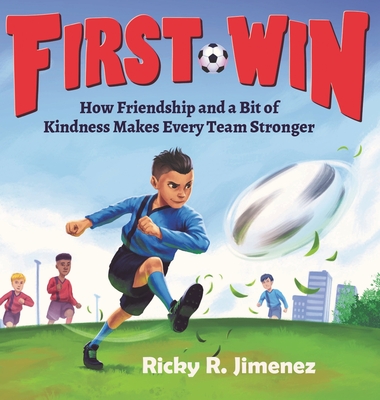 First Win: How Friendship and a Bit of Kindness Makes Every Team Stronger (Hardcover)

Ricky Jimenez is a little boy who is only eight years old with stars in his eyes. He is a thoughtful, empathic, observant, and considerate soul, which is already showing in his decision-making and writing. He lives in Riverside, California, with his mom, dad, little sister, and dog. He goes to a Private Christian School and loves History. Interestingly, he is the star of both spectrums; games, and studies. After doing his homework, he loves to play video games, which he is also exceptionally good at. He studies independently and puts in efforts to get the best grades with responsibility and conviction. Recently when he was spending way too much time playing Fortnite, he and his mom brainstormed ways to protect his eyes from constant exposure to screen. After some thinking, Ricky went up to his mom and revealed he wanted to utilize his free time in writing a story. He knew already he had to write about his favorite sport; soccer. What surprised his mom and dad even further was that he was compassionate and observant, and through his story, he wanted to reflect the impact of bullies on young minds. His story is about two brothers, John and Jake. The book takes us through their journey of anxiety for the fast-approaching soccer match. Surprisingly, Ricky Jimenez highlights how the win wasn't that important for the brothers, but instead, it's the troll that follows after the loss. Jimenez's sensitivity takes us through the journey of two brothers from the eye of an eight-year-old. Seeing the school through the eyes of Jimenez is refreshing and gives some valuable insight. Moreover, the book makes an interesting read for children his age. And refreshingly for us, learning about the value of kindness, losing, competition, and friendship from a child's viewpoint.