Apartheid in South Africa: The History and Legacy of the Notorious Segregationist Policies in the 20th Century (Paperback) 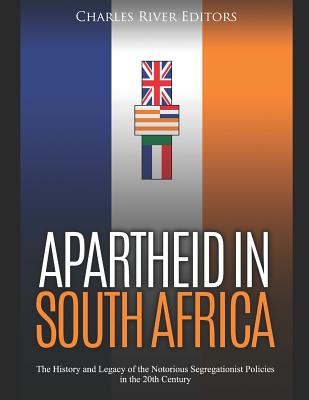 Apartheid in South Africa: The History and Legacy of the Notorious Segregationist Policies in the 20th Century (Paperback)


Not On Our Shelves—Ships in 1-5 Days
(This book cannot be returned.)
*Includes pictures
*Includes online resources and a bibliography for further reading
"During my lifetime I have dedicated myself to this struggle of the African people. I have fought against white domination, and I have fought against black domination. I have cherished the ideal of a democratic and free society in which all persons will live together in harmony and with equal opportunities. It is an ideal which I hope to live for. But, my lord, if needs be, it is an ideal for which I am prepared to die." - Nelson Mandela, 1964
On June 1, 1948, Daniel Malan arrived in Pretoria by train to take office, and there he was met by a huge crowd of cheering whites. He told the audience, "In the past, we felt like strangers in our own country, but today, South Africa belongs to us once more. For the first time since Union, South Africa is our own. May God grant that it always remain our own." Back in Johannesburg, the leadership of the ANC, including the young attorney Nelson Mandela, listened to these celebratory prognostications in a grim mood. As strangers in their own country, they all understood that the South African liberation struggle would not be won overnight. In fact, the era of apartheid was only just about to formally start.
Although apartheid is typically dated from the late 1940s until its dismantling decades later, segregationist policies had been the norm in South Africa from nearly the moment European explorers sailed to the region and began settling there. Whether it was displacing and fighting indigenous groups like the Khoi and San, or fighting other whites like the Boer, separation between ethnicities was the norm in South Africa for centuries before the election of Malan signaled the true rise of the Afrikaner far right.
The man most associated with dismantling apartheid, of course, is Nelson Mandela. With the official policy of apartheid instituted in 1948 by an all-white government, Mandela was tried for treason between the years of 1956-61 before being acquitted. He participated in the Defiance Campaign of 1952, and oversaw the 1955 Congress of the People, but when the African National Congress was banned in 1960, he proposed a military wing, despite his initial reluctance toward violent resistance, a reluctance which had its roots in original nonviolent protests through the South African Communist Party. The ANC did not openly discourage such an idea, and the Umkhonto we Sizwe was established. Mandela was again arrested in 1962 and tried for attempts to overthrow the government by violence. The sentence was five years of hard labor, but this was increased to a life sentence in 1964, a sentence handed down to seven of his closest colleagues as well.
Mandela would eventually serve 27 years, but his statements made in court received enormous international coverage and acclaim, and his reputation grew during his time in Robben Island Prison of Capetown, the Pollsmoor and Victor Verster Prisons. He was ultimately released in February 1990, in large part as a result of the international campaign generated by his words and the current South African story. Shortly after that, he was elected as the first man of African descent to the presidency of South Africa, which he held from 1994-1999. Most significant was that Mandela was elected from the first multi-factional, multi-racial election ever held in the country, a result of extensive negotiations with then President F.W. Klerk.
Apartheid in South Africa: The History and Legacy of the Notorious Segregationist Policies in the 20th Century looks at the controversial policies, the background behind them, and their influence on the country. Along with pictures and a bibliography, you will learn about apartheid in South Africa like never before.