Rebels Against the Raj: Western Fighters for India's Freedom (Hardcover) 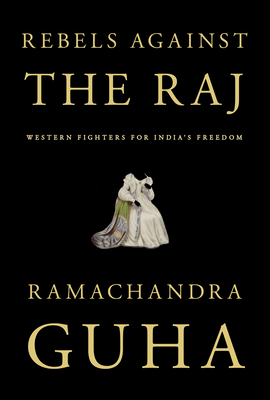 Rebels Against the Raj: Western Fighters for India's Freedom (Hardcover)


On Our Shelves Now at:
An extraordinary history of resistance and the fight for Indian independence—the little-known story of seven foreigners to India who joined the movement fighting for freedom from British colonial rule.

Rebels Against the Raj tells the story of seven people who chose to struggle for a country other than their own: foreigners to India who across the late 19th to late 20th century arrived to join the freedom movement fighting for independence from British colonial rule.

Of the seven, four were British, two American, and one Irish. Four men, three women. Before and after being jailed or deported they did remarkable and pioneering work in a variety of fields: journalism, social reform, education, the emancipation of women, environmentalism.

This book tells their stories, each renegade motivated by idealism and genuine sacrifice; each connected to Gandhi, though some as acolytes where others found endless infuriation in his views; each understanding they would likely face prison sentences for their resistance, and likely live and die in India; each one leaving a profound impact on the region in which they worked, their legacies continuing through the institutions they founded and the generations and individuals they inspired.

Through these entwined lives, wonderfully told by one of the world’s finest historians, we reach deep insights into relations between India and the West, and India’s story as a country searching for its identity and liberty beyond British colonial rule.

RAMACHANDRA GUHA has taught at Yale and Stanford universities, the University of Oslo, the Indian Institute of Science, and the London School of Economics. His books include Gandhi: The Years That Changed the World, 1914-1948, Gandhi Before India (a 2014 New York Times Notable Book and a San Francisco Chronicle Best Book of the Year), and the award-winning India After Gandhi. He has written on social and political issues for The New York Times, and for the British and Indian press, including columns in the Daily Telegraph and the Hindustan Times. He lives in Bangalore, India.

A New Yorker Best Book of the Year

“Insightful… Captivating… Guha’s previous works have distinguished him as an exceptional chronicler of India’s modern history. His latest volume provides fresh perspectives on the independence struggle that will appeal to those seeking more obscure eyewitness accounts. And since the book’s main figures were born outside of India, Rebels Against the Raj may strike a chord with contemporary outsiders who themselves have been seduced by India’s history and culture.”
—Samir Puri, New York Times

"Mr Guha’s new book [is] a reminder of how many outsiders held (and hold) deep affection for India and its democratic cause... The stories of his seven subjects—four men and three women—are deftly interwined... Mr Guha does not overstate the role of these foreigners... His account does not change the broad narrative of how Indians won freedom for themselves. Its real point is as much about the future as the past—an argument for the tolerant, outward-looking country India could once again become."
—The Economist

"Fascinating and provocative reading... Guha organizes his material expertly and presents it clearly and stylishly, illuminating an aspect of Raj history which is often forgotten or neglected but which is nonetheless crucial... This superb book... add[s] a new dimension to the histories both of subject India and of imperial Britain – and [is] a thoroughly good read."
—Bernard Porter, The Literary Review

"In an age of bigotry and narrow nationalisms, Ramachandra Guha’s new book is a welcome reminder that people’s opinions, passions and life’s work do not have to be dictated by their ethnic identities or their countries of birth."
—Victor Mallet, Financial Times

"Guha has done well to remind us of these forgotten stories, all the more as India, like much of the world, is becoming more xenophobic and intolerant, believing all the virtues lie within national frontiers."
—Mihir Bose, Irish Times

"Told through the lives of seven emigrants from the West who devoted themselves to India, the book offers a novel perspective of India’s fight for independence, from early in British rule through holding post-independence rulers to account…. For those looking for a new perspective on India’s fight for independence and beyond, and what drives people to devote their life and freedom to a cause not their own.”
—Library Journal

"Compelling minibiographies of a group of fighters for Indian independence who were born outside India but were fiercely devoted to the cause... An inspiring education tool for those researching India and nonviolent independence movements."
—Kirkus

"Guha’s elegantly written group portrait ably conveys the passion and idealism of the Gandhian independence movement and its hold over the Western imagination."
—Publishers Weekly