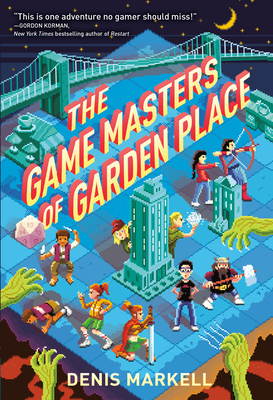 
In Stock—Click for Locations
A quirky Dungeons & Dragons-inspired adventure that will appeal to gamers and readers of the Mr. Lemoncello's Library series.

What if your favorite fantasy game characters showed up on your doorstep IRL?

The five are soon racing around town on a wild adventure that tests their both their RPG skills and their friendship. Will Ralph and crew be able to keep their characters out of trouble? Trying to convince a sticky-fingered halfling rogue not to pickpocket or a six-foot-five barbarian woman that you don't always have to solve conflicts with a two-handed broadsword is hard enough. How will they ever send the adventurers back to their mystical realm?

"Both funny and heartfelt...[The Game Masters of Garden Place] has as much to offer diehard fans as it does newcomers to fantasy role-playing."--Bulletin
Denis Markell's first novel for kids was Click Here To Start. His second book is based on his tween son's Dungeons & Dragons game (well, except the part where the characters come to life). . . . He lives in a small apartment in Brooklyn with his wife, illustrator Melissa Iwai, and his son. You can find him on Twitter at @DenisMarkell, and yes, he'd be happy to do a Skype author visit for your kid's class.
Praise for THE GAME MASTERS OF GARDEN PLACE:

"Both funny and heartfelt...[it's] a story that has as much to offer diehard fans as it does newcomers to fantasy role-playing." —Bulletin

Honors and Praise for Denis Markell's CLICK HERE TO START:

"Humor, believable characters, and adventure...keeps readers in suspense to the end. A winner for mystery enthusiasts."—Kirkus Reviews

"In this clever debut, Markell takes readers on a clue-filled adventure...[and] maintains an energetic, entertaining balance of character-driven narrative and tricky challenges."—Publishers Weekly

"This book will appeal to a wide audience. Readers who enjoyed Schreiber's Game Over, Pete Watson will enjoy the video game component; fans of Fitzgerald's Under the Egg will enjoy reading more about the Monuments Men; detective story aficionados will revel in the inclusion of The Maltese Falcon story. This is a great book to hand to just about any middle grade reader."—YA Books Central