Shoot Like a Girl: One Woman's Dramatic Fight in Afghanistan and on the Home Front (Paperback) 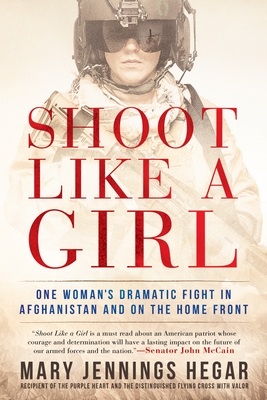 Shoot Like a Girl: One Woman's Dramatic Fight in Afghanistan and on the Home Front (Paperback)

“A must-read about an American patriot whose courage and determination will have a lasting impact on the future of our Armed Forces and the nation.”—Senator John McCain

On July 29, 2009, Air National Guard major Mary Jennings “MJ” Hegar was shot down while on a Medevac mission on her third tour in Afghanistan. Despite being wounded, she fought the enemy and saved the lives of her crew and their patients. But soon she would face a new battle: to give women who serve on the front lines the credit they deserve...

After being commissioned into the U.S. Air Force, MJ Hegar was selected for pilot training by the Air National Guard, finished at the top of her class, then served three tours in Afghanistan, flying combat search-and-rescue missions, culminating in a harrowing rescue attempt that would earn MJ the Purple Heart as well as the Distinguished Flying Cross with Valor Device.

But it was on American soil that Hegar would embark on her greatest challenge—to eliminate the military’s Ground Combat Exclusion Policy, which kept female armed service members from officially serving in combat roles despite their long-standing record of doing so with honor.

In Shoot Like a Girl, MJ takes the reader on a dramatic journey through her military career: an inspiring, humorous, and thrilling true story of a brave, high-spirited, and unforgettable woman who has spent much of her life ready to sacrifice everything for her country, her fellow man, and her sense of justice.

Mary Jennings “MJ” Hegar lives in Austin with her family and works as an Executive Coach and Consultant. She gives back to her alma mater by mentoring cadets and guest-lecturing at the University of Texas. MJ continues writing and speaking about her experiences in the military and her fight for increased military effectiveness through equality.
“Major Mary Jennings Hegar has established her warrior credentials, joining an elite group of American service members who have bravely served our nation in combat. In Shoot Like a Girl, Major Hegar shares her remarkable experience on the front lines both overseas and at home—from exchanging fire with the Taliban and saving her comrades in Afghanistan, to fighting to open all combat positions to women in the military.”—Senator John McCain

“A stirring story of bravery that also captures our humanity. Major Hegar will move you with her story, her grit, her valor. And her heart. From the battlefield to the courtroom, this is a story of service and determination Americans should know.”—Gayle Tzemach Lemmon, New York Times bestselling author of Ashley's War: The Untold Story of a Team of Women Soldiers on the Special Ops Battlefield

“From her decorated service in Afghanistan to the courtrooms on the home front, MJ Hegar's story is one of incredible courage, patriotism, ambition, and resilience. Shoot Like a Girl is not only an excellent read, but more important also a book of great historical and academic significance. It is simply a must read for anyone interested in military culture and the integration of women in military organizations.”—Robert Egnell, Head of the Department of Security, Strategy, and Leadership at the Swedish Defence University