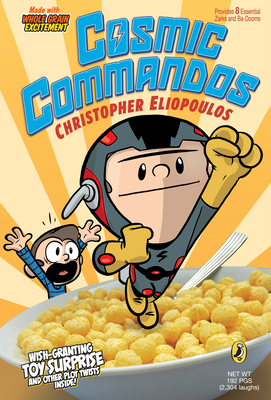 
Special Order—Subject to Availability
In this graphic novel adventure for readers of Monster Mayhem and Roller Girl, a pair of twin brothers accidentally bring their favorite video game to life—and now they have to find a way to work together to defeat it.

Jeremy and Justin are twins, but they couldn’t be any more different from each other. Jeremy is a risk taker who likes to get his hands dirty; Justin prefers to read, focus, and get all his facts straight before jumping in. But they do have one important thing in common: They both love video games. When Jeremy wins a cereal-box charm that brings his favorite video game to life, villains and all, he finds that he’s in way over his head. Justin knows everything there is to know about the rules of the game—he read the handbook, of course—and Jeremy isn’t afraid to try new things. Can these two mismatched brothers work together to beat the video game that has become their life?
Christopher Eliopoulos began his illustration career at Marvel, and has worked on thousands of comics, including Franklin Richards: Son of a Genius, Pet Avengers, and Cow Boy, all of which he wrote and illustrated. He is also the illustrator of the New York Times bestselling Ordinary People Change the World series. He lives in New Jersey with his wife and their identical twin sons.
Praise for Cosmic Commandos

"Author/illustrator and comics artist Eliopoulos bases his graphic novel on his own identical twin sons, and the reality of their relationship shines through the sci-fi-light tale with its silly villain (named Skorn) and copious action and plentiful jokes. . . . Readers will look for Eliopoulos' next venture into kids' comics with anticipation." —Kirkus

"A graphic novel that balances near-nonstop action with a testy sibling relationship. . . . Eliopoulos’s chunky linework and the squat proportions of his young heroes evoke Bill Watterson’s Calvin and Hobbes strip . . . and diehard comics fans will appreciate the references he sneaks in to Peanuts, Garfield, and Jarrett J. Krosoczka’s Lunch Lady series." —Publishers Weekly

"An emotionally complex and satisfying story. . . . Eliopoulos's Charles Schultz-inspired cartooning, with balloon-headed characters and popping colors, keeps the action light and zippy even when the emotions run high." —Booklist