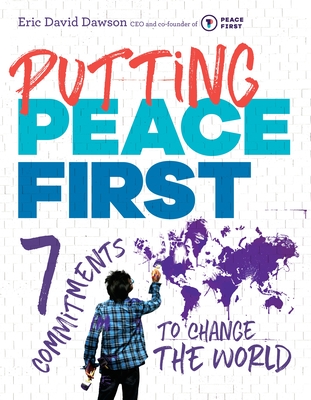 
In Stock—Click for Locations
Young people are hungry to change the world, but often aren't given the chance. This book empowers them to make change happen.

When he was just eighteen, Eric David Dawson co-founded the non-profit Peace First based on the idea that young people can change the world for the better--not someday, but right now. Twenty-five years later, Peace First has reached millions worldwide, teaching young people how to become peacemakers and create real change. Now, Dawson has written PUTTING PEACE FIRST, the handbook every aspiring peacemaker needs.

Using the inspiring stories of real life peacemakers, each chapter highlights a different aspect of peacemaking, from Opening Your Heart to Taking a Stand. With clear, step-by-step explanations of how each peacemaker achieved their goals, this book is a guide for anyone who wants to make a difference.
Eric David Dawson is the CEO and co-founder of Peace First. He got his professional start directing a summer camp in Boston's public housing complexes and doing organizing around disability awareness. He is an Ashoka, Echoing Green, and Pop!Tech Fellow. He lives with his wife and three children in Boston.
"A great title for budding changemakers" -School Library Journal

"A masterfully inspirational call to arms, the book is solidly anchored in reality, providing concrete, manageable actions and resources, as well as practical advice for navigating and persisting in the face of the certainty of encountering challenges, roadblocks, and resistance." -Voya