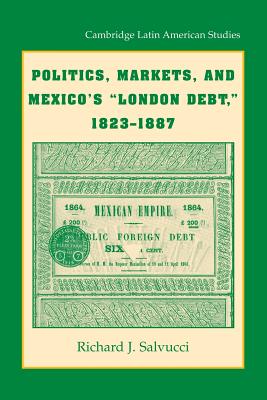 
Not On Our Shelves—Ships in 1-5 Days
(This book cannot be returned.)
In 1823 and 1824, the newly independent government of Mexico entered the international capital market, raising two loans in London totaling 6.4 million. Intended to cover a variety of expenses, the loans fell into default by 1827 and remained in default until 1887. This case study explores how the loan process worked in Mexico in the early nineteenth century, when foreign lending was still a novelty, and the unexpected ways in which international debt could influence politics and policy. The history of the loans, the efforts of successive governments in Mexico to resume repayment, and the efforts of the foreign lenders to recover their investment became one of the most significant, persistent, and contentious, if largely misunderstood, issues in the political and financial history of nineteenth-century Mexico. The loans themselves became entangled in partisan politics in Mexico and abroad, especially in Great Britain and France, and were a fertile source of speculation for a wide range of legitimate -- and not-so-legitimate -- international financiers, including Baring Brothers and the House of Lizardi.