The Captivity of Hans Stade of Hesse in A.D. 1547 1555, Among the Wild Tribes of Eastern Brazil (Cambridge Library Collection - Hakluyt First) (Paperback) 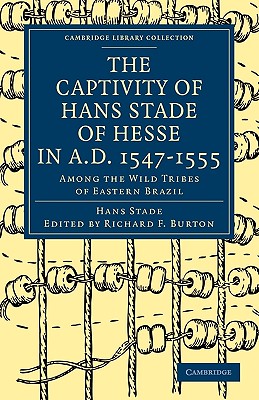 The Captivity of Hans Stade of Hesse in A.D. 1547 1555, Among the Wild Tribes of Eastern Brazil (Cambridge Library Collection - Hakluyt First) (Paperback)


Not On Our Shelves—Ships in 1-5 Days
(This book cannot be returned.)
The publications of the Hakluyt Society (founded in 1846) made available edited (and sometimes translated) early accounts of exploration. The first series, which ran from 1847 to 1899, consists of 100 books containing published or previously unpublished works by authors from Christopher Columbus to Sir Francis Drake, and covering voyages to the New World, to China and Japan, to Russia and to Africa and India. First published in English in 1874, this book contains Hans Stade's autobiographical account of his capture by the indigenous Brazillian Tupinamba people in 1554, and his description of their customs. Stade was held prisoner for a year, and according to his sensational report he witnessed many acts of cannibalism and was offered roasted human flesh by the chief of a Tupinamba village. The nineteenth-century editor added a preface describing the area of Brazil in question, where he himself had spent three years of 'exile'.