Travels of Pedro de Cieza de Leon, A.D. 1532 50: Contained in the First Part of His Chronicle of Peru (Paperback) 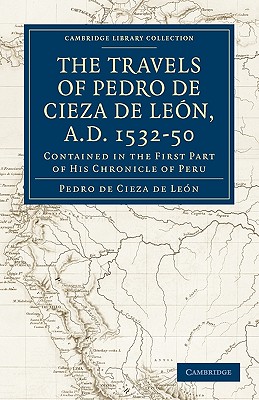 Travels of Pedro de Cieza de Leon, A.D. 1532 50: Contained in the First Part of His Chronicle of Peru (Paperback)


Not On Our Shelves—Ships in 1-5 Days
(This book cannot be returned.)
The publications of the Hakluyt Society (founded in 1846) made available early accounts of exploration. The first series, which ran from 1847 to 1899, consists of 100 books containing published or previously unpublished works by authors from Christopher Columbus to Sir Francis Drake, and covering voyages to the New World, to China and Japan, to Russia and to Africa and India. Pedro de Cierza de Leon (c.1520 1554) was a Spanish solider who participated in many expeditions throughout South America. Between 1548 and 1553 he travelled across Peru, interviewing local officials and Inca prisoners and collecting information about the landscape and indigenous people. Volume 33 of the Hakluyt series, first published in 1874 and reissued here, begins the first English translation of his work, which was continued in Volume 68 (1883). This volume contains detailed descriptions of the geography of Peru and an ethnographical account of different indigenous cultures.