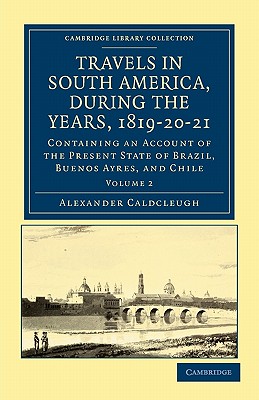 
Not On Our Shelves—Ships in 1-5 Days
(This book cannot be returned.)
First published in 1825 and based on his diaries, this two-volume account by Alexander Caldcleugh (1795 1858) of his experiences in Brazil, Buenos Aires, and Chile portrays a diverse and changing continent. London-born Caldcleugh was posted to South America in 1819 as private secretary to the British minister at the Portuguese royal court (based in Brazil 1808 21). Following that two-year mission, he returned to South America in 1829 and remained there until his death. Caldcleugh's book appealed to the avid interest of European readers in the 'New World'. It was well-received upon publication and in 1826 was translated into German. With its close attention to geography, geology, politics, economics, culture and society in the region, and its description of an adventurous crossing of the Andes, the book is both a fine example of the nineteenth-century travel narrative and a document of colonial attitudes. Volume 2 focuses particularly on mining.