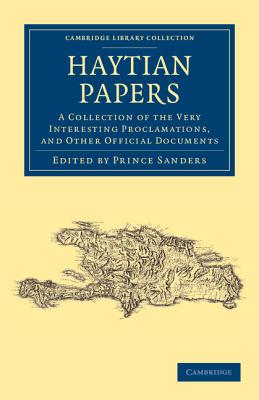 
Not On Our Shelves—Ships in 1-5 Days
(This book cannot be returned.)
Prince Sanders (1775-1839) was an African-American teacher and advocate of black American emigration to Africa and Haiti. When Sanders was on a speaking tour of England he met abolitionist William Wilberforce, who encouraged him to go to Haiti and meet King Henri Christophe (1767-1820). Haiti during this time was divided, and Christophe ruled over the northern region. Sanders travelled to the island and was quickly hired as Christophe's adviser. In 1816 Sanders published this translation of documents, which include Christophe's land reforms, his establishment of a monarchy in Haiti, and some of his correspondence. This publication was part of an attempt by Christophe and Sanders to show white Europeans that former slaves could successfully run their own country without international interference. Although Haiti was reunited in 1820, after Christophe's death, these documents illustrate his efforts to protect the country during its fragile early years of independence.