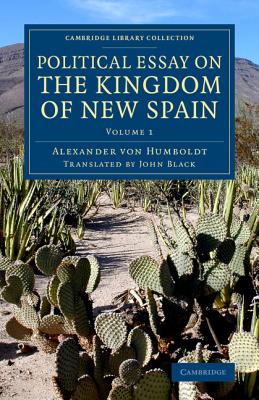 
Not On Our Shelves—Ships in 1-5 Days
The acclaimed Prussian naturalist Alexander von Humboldt (1769 1859) was referred to by Charles Darwin as 'the greatest scientific traveller who ever lived'. Several of his works were in the library aboard the Beagle, including the multi-volume Personal Narrative of Travels, two books on geology and Tableaux de la nature (all reissued in the Cambridge Library Collection). Darwin's copy of this two-volume 1811 New York edition of Humboldt's Political Essay (originally published in French earlier that year) is inscribed 'Buenos Ayres', suggesting he acquired it there in 1832 3, without its accompanying atlas (forthcoming). Humboldt had spent a year in Mexico in 1803 4, and was struck by its 'civilization' as compared to regions of South America that he had visited earlier on his expedition. Volume 1 of his account contains a 'geographical introduction' and discussions of physical geography, agriculture, and the ethnic diversity, distribution and health of the population.