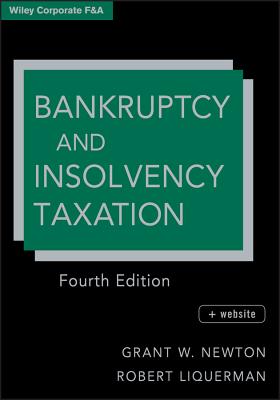 
Not On Our Shelves—Ships in 1-5 Days
(This book cannot be returned.)
The thousands of mergers, acquisitions, and start-ups that have characterized the past years of business have created an increasing number of corporations in financial trouble: specifically, a shortage of venture capital or quick cash. Consequently, bankruptcy protection is now viewed as a strategic move to protect corporations from their creditors and allow them to reorganize. Fully revised and updated with new case studies and the latest coverage of regulations, Bankruptcy and Insolvency Taxation, Fourth Edition provides the answers to the questions financial managers will have on the tax aspects of bankruptcy strategy.
Grant Newton, CPA, CIRA, CMA (Medford, OR) is?the founder and President of the National Association of Insolvency Accountants. He is also the editor and contributing author of CMA Review (Malibu Publishing). Dr. Newton is a former member of the AICPA's Task Force on Financial Reporting by Entities in Reorganization Under the Bankruptcy Code, which resulted in the issuance of AICPA Statement of Position 90-7. He speaks throughout the United States on bankruptcy and insolvency matters and is frequently an expert witness on bankruptcy issues. Robert Liquerman (Washington, D.C.) is a principal in KPMG LLP's Washington National Tax Practice, Corporate Tax Group, specializing in matters under Subchapter C of the Internal Revenue Code. He is an adjunct professor of law in the LL.M. program at the Georgetown University Law Center and previously served as an adjunct professor in the LL.M. program at The College of William & Mary, Marshall-Wythe School of Law.?He is a frequent speaker on bankruptcy and tax issues at various tax institutes and conferences around the country.